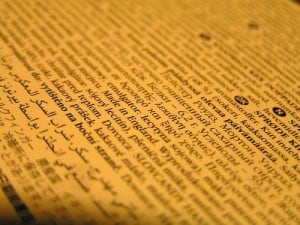 “To have another language is to possess a second soul.”

Learning another language can be a lonely and frustrating process. Sometimes we need a gentle push to give us a break and boost our motivation. In this post, I am going to introduce a couple of books that serve as inspirational and practical resources for those who want to forgo expensive and ineffective language classes and go it alone in learning any language.

How to Learn Any Language – Barry Farber

If you must get a book on language learning, get this one. I have mentioned it before on this blog, but Barry Farber’s How to Learn Any Language Quickly, Easily and On Your Own has positively impacted my life in a huge way. I was lucky enough to read the book as a teenager. Without a doubt, my international exploits were made possible by Farber’s wise words. In all likelihood, I would never have gone to live in Italy, let alone Japan without reading this book. It is a classic take on how to study a language on your own.

I rarely read physical books these days (no room in my tiny Tokyo apartment!), so I was pleased to see a Kindle version had recently been released and promptly bought a copy. So why would I own two versions of this book? In short, because this book is inspiring and my other copy was getting pretty worn. Like other classic books, it is something you can return to again and again when you need encouragement.

The first part of the book is auto-biographical and details the author’s early life. Farber accounts how falling behind in Latin grammar class at school led him to learn Chinese. You get this comical image of a little American boy trying to speak Chinese with sailors stationed in Miami Beach during World War II. What started out as escapism from a class he detested eventually turned into a lifelong pursuit of Chinese and many other languages. Now in his 80s, Farber is said to have a working knowledge of more than 25 languages.

One downside of the book is that it was written in the pre-internet era. There is no mention of some of the great online resources that have cropped up in recent years. However, concepts like making the little moments count, using mnemonics and the multiple-track attack (using many resources at a time to attack the language from different angles) all hold true to this day. Another great insight is that if you are self-studying, you are free to buy as many books and resources as you need! The reason? It is still going to be cheaper and more effective than taking classes. I couldn’t recommend a book more highly.

The Way of the Linguist – Steve Kaufmann

Another helpful guide to learning languages via self-study is Steve Kaufmann’s The Way of the Linguist.

Kaufmann speaks 10 languages fluently. Some may think he is naturally gifted, but he is certainly no linguistic “genius” and makes no claims to be. Despite how that might sound, I mean that as a compliment. He has learned languages through a combination of hard work and lifestyle choice. Kaufmann has lived in various countries throughout an illustrious business career which he admits “would not have been possible” without learning languages.

On Amazon, there are a couple of negative reviews that seem to suggest that Kaufmann’s book is all about self-marketing. It didn’t strike me that way. I got a lot of practical value from it as I do from reading his language blog. He is much more realistic than certain others out there who make claims of reaching “fluency” in a matter of months, all with the goal of selling their latest eBook.

In a nutshell, Kaufmann’s learning approach focuses on getting as much input as possible by listening and reading content you’re interested in. I like this philosophy. Like detective novels? Pick one up in Chinese. Prefer tennis? Watch the latest Grand Slam on Japanese TV. Want to become an entrepreneur? Read stories of successful businessmen in Korean.

Some learners who wouldn’t usually watch the news in English somehow think they “should” when they study a foreign language.They are making the language into a chore.. Kaufmann encourages learners to do what they feel like doing. Find stuff you like and the language will follow. I agree. This is 2013! There are a wealth of resources out there, so follow your interests and find some content that you will enjoy.

What I like about Kaufmann is his willingness to air his views and speak on camera, in whatever language. Of course, anonymous users on YouTube sometimes pick at his grammatical mistakes or intonation. It is much easier to be a critic than to truly put yourself out there.

Like Barry Farber, Kaufmann is a strong advocate of self-study. He also laments the damaging status quo that exists in second language education. Despite the woeful results, schools continue to use the same methods to “teach” languages. Languages are learned, not taught. How tragic that negative classroom experiences are discouraging people from taking up foreign languages. It’s a lonely battle, but I admire Kaufmann’s personal crusade against the establishment. Every little helps.

I am not going to break down his language ability here (that is for native speakers of the respective languages) but I can personally attest that his French is excellent. You can get the Kindle version of his book here.

It all adds up! (Or how to master a foreign language)

Hi everyone… for a complete method to learn any language on your own, I found this website which isn’t bad: http://www.learnlanguagesonyourown.com